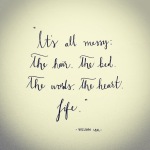 I’ve held tight to someone I loved for fear of losing him; I’ve lost him because I’ve held on too tight. I’ve held a stranger’s hand because I was terrified and I’ve been so terrified that I couldn’t even feel my hands.

I’ve obsessed on others to avoid my problems. I’ve created bigger problems because of my obsession.

I’ve been betrayed by someone who I thought was my soul mate. I’ve betrayed him as well.

I’ve broken the law and I’ve let the law break me.

I’ve believed in perfect relationships and I’ve found out they don’t exist.

I’ve fought for what I believed was true love only to find out it was just passion.

I’ve destroyed phones, doors and windows out of anger and I’ve let that same anger destroy me.

I’ve kept from expressing what I was thinking to please others; other times I spoke words I didn’t mean to hurt them.

I’ve told lies because it was easier than telling the truth. I’ve believed lies for the same reason.

I’ve tried to desperately change others but I struggled to change myself.

I’ve texted those I didn’t want just so I wouldn’t text those who were on my mind.

I’ve dated the wrong people hoping they would turn into the right ones. I’ve spent a lot more time looking for a great man than I did becoming a great woman.

I’ve thrown away my dignity and I’ve embarrassed myself multiple times. But always for the same reason. And the same person.

I’ve pissed away my reputation but only because I didn’t know any better.

I have literally chased a car just because it was taking away the one I loved; I’ve run away from those who loved me.

I have insecurity issues, abandonment issues and many other issues.

I’ve hurt so many but hopefully I’ve harmed none.

I regret many choices, many actions and many words. But I don’t regret the experience.

I am constantly learning and I’ve learned that I will always make mistakes.

I am looking to improve because I know improvement is essential.

But I am not looking for the right formula.

Because I know I won’t always get it right.